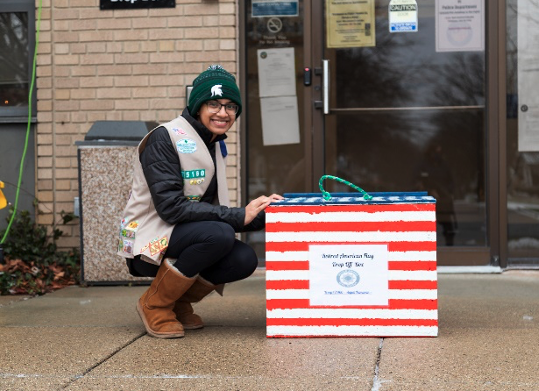 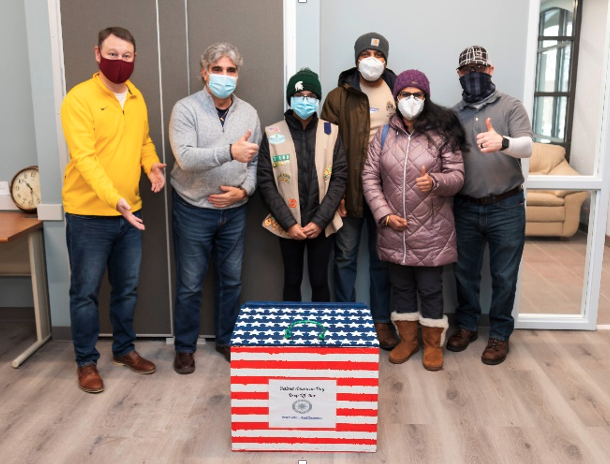 Anjali Kumaran recently earned her Silver Award from Girl Scouts of Southeastern Michigan. Her project focused on providing proper disposal boxes and procedures for worn U. S. flags in the Rochester area.

Many Americans proudly fly the U.S. flag at their homes, places of work and schools, but don’t have a way to properly, and with honor, dispose of those flags when they become ripped and worn. There is proper etiquette for disposing of the U.S. flag in a dignified manner. Just throwing it in the trash is disrespectful. Anjali saw a need to provide ways for Rochester area residents to properly dispose of the American flag, so she created and built five wooden flag disposal boxes to collect these flags at different Rochester locations. In addition, Anjali aligned several groups including Girl and Boy Scouts and local Veterans to periodically collect them for proper disposal with a flag retirement ceremony. The boxes, painted like the American Flag, are now available outside of the Rochester Police Department and the Rochester Public Works offices as well as at all three Rochester High Schools.

When asked about her project, Anjali said, “I think my project gave me a great opportunity to learn and teach the people of my community the proper way to respect and retire the American Flag.” When we respect the Flag, we respect all the people who have and still are working to save the honor of our Flag”. By earning the Girl Scout Silver Award, Anjali has become a community leader. Anjali saw a need in her community and took action. According to her Troop #75160 Leader, Christal Hawley Renaud, “Anjali showed extraordinary dedication and perseverance with her project. Having started it in early 2020, the pandemic set her back, but she preserved to finish, shifting focus from just the school district to the overall community Finishing it at time when unity and patriotism is so highly needed in our communities.” Her accomplishments reflect leadership and citizenship skills that set her apart. As Ronald Reagan said, “When we honor our flag, we honor what we stand for as a Nation – freedom, equality, justice and hope.”

About the Girl Scout Silver Award

Since 1916, girls have been making meaningful, sustainable change in their communities and around the world. The Girl Scout Silver Award is the highest award a Girl Scout Cadette can achieve and gives girls a chance to work with as a team with one other Girl Scout or as an individual. Girls focus on projects that make lasting change in their communities. Only about 10% of Girl Scouts nationwide receive the Silver Award. Anjali will be presented her award at ceremony by GSSEM in May of this year.